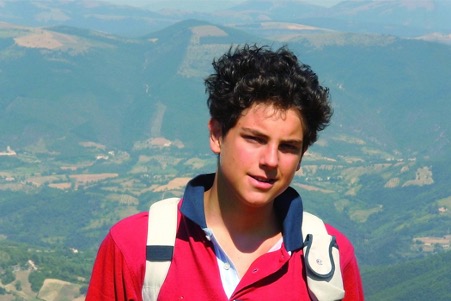 Carlo Acutis was born in London on the 3rd May 1991 to Italian parents who returned to Milan soon afterwards.  Carlo was a pious child, attending daily Mass, frequently reciting the rosary, and  making weekly confessions.  Exceptionally gifted in working with computers, Carlo Acutis, as well as computer programming, he also liked film editing, website creation, and editing and laying out small publications.  Carlo developed a website which catalogued The Eucharistic Miracles of the World.  It was on the website that he said, “the more Eucharist we receive, the more we will become like Jesus, so that on this earth we will have a foretaste of heaven”.

He loved the Eucharistic Lord above all and drew strength from Him, spending his life with the special mission of making the Eucharistic miracles known to the world – “The Eucharist is my Highway to Heaven”.    Carlo admired and tried to imitate the great humility of St Francis of Assisi, spending much of his time in Assisi and also in La Verna, the place where the Lord marked His faithful and perfect disciple with the visible signs of His suffering – the stigmata.

Carlo Acutis was a grounded individual, who knew what was truly important in life. Although he enjoyed recreational activities like playing on his PlayStation, he knew that these distractions could claim a sort of ‘tyranny’ over the soul. Carlo knew that a person could become addicted, a slave to such things, and he always had a sense that he couldn’t waste time. So he imposed on himself a time limit of playing one hour per week on his PlayStation.

Carlo would also write in his journal about how to improve himself: “How am I with my parents? How well do I obey my teachers and get along with my classmates?” He knew very well the struggles and worked hard on himself, always trying to improve, to be the best possible person he could be. Carlo would say, “What does it matter if you can win a thousand battles if you cannot win against your own corrupt passions? It doesn’t matter. The real battle is with ourselves.”

After contracting leukaemia, Carlo offered his pain for Pope Benedict XVI and the Church, saying, “I offer all the suffering I will have to suffer for the Lord, for the Pope, and the Church.”

The doctor treating Carlo asked him if he was suffering much pain and he responded, “There are people who suffer much more than me.”

Carlo Acutis died on 12 October 2006 and was buried in Assisi.

Before his death, Carlo said, “I am happy to die because I lived my life without wasting even a minute of it on anything unpleasing to God”.

This is what he asks of us, that we may not waste our lives on pointless things that don’t please God. By doing so, we will not fear death, because we will be secure in the knowledge that we lived a good life and will be united with our Creator in Heaven.

A petition was approved for the cause of canonisation in 2013, and the formal introduction to the cause came later the same year when he was titled as a ‘Servant of God’, which is the first stage on the path towards sainthood.

Then, in 2018, Pope Francis confirmed his life of heroic virtue and declared him ‘Venerable’.

A miracle was then attributed to him from 2013, which involved a young boy from Brazil who suffered from a rare pancreatic disease. Pope Francis confirmed this miracle in early 2020, and Carlo was beatified on 10 October the same year, in Assisi.

Carlo Acutis had several role models in his life who inspired him, including: Saint Francis of Assisi, Saints Francisco and Jacinta Marto, Saint Dominic Savio, Saint Tarcisius, and Saint Bernadette.

But more than that, Carlo is a role model and inspiration for teenagers who aren’t sure whether they can be both holy and “normal” in today’s society. May more young people learn about Carlo and be inspired by his witness to authentic living.

we thank you for giving us Carlo,

a model of life for young people, and a message of love for all.

You made him fall in love with your son Jesus, making the Eucharist his

You gave him Mary, as a beloved mother, and you made him through the rosary,

a cantor of her tenderness.

Receive his prayer for us.

Look above all upon the poor, whom he loved and assisted.

Grant me too, through his intercession, the grace that I need (mention the intention).

And make our joy full, raising Carlo among the saints of your Church,

so that his smile shines again for us to the glory of your name.