In St Joseph’s Mission Primary School in impoverished and drought-ridden Southern Zimbabwe, children are once again lining up at the school gates after Covid-19 measures forced classes to close for six months. 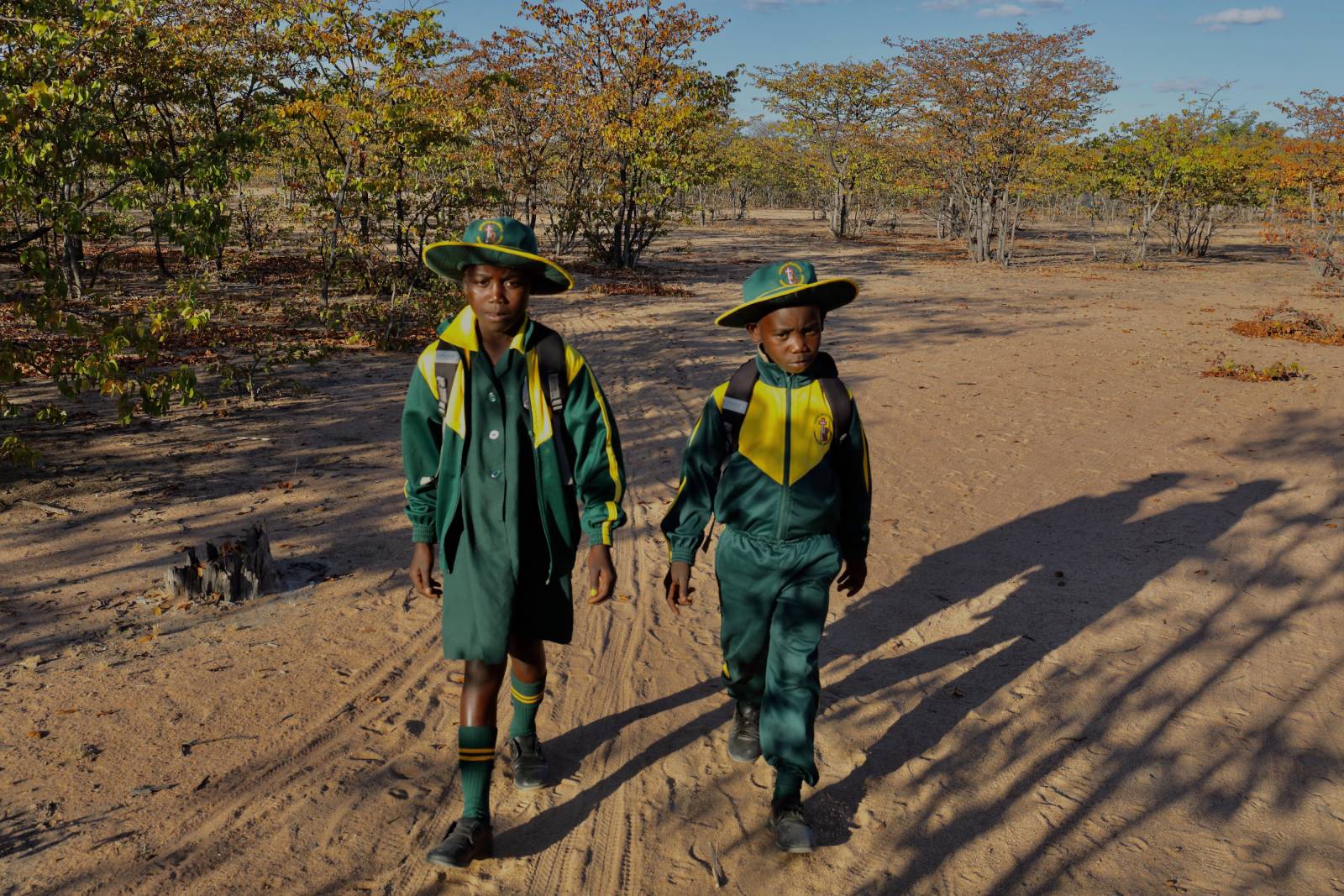 Dressed brightly in their green and yellow uniforms, with a matching hat to keep the hot sun away, schoolchildren Nomatter (11) and Forward (8) – like many children around the world – are happy to be back in the classroom after a long period at home. On arrival at the school, a teacher checks their temperature, sanitises their hands, and ensures the children are wearing their masks correctly. 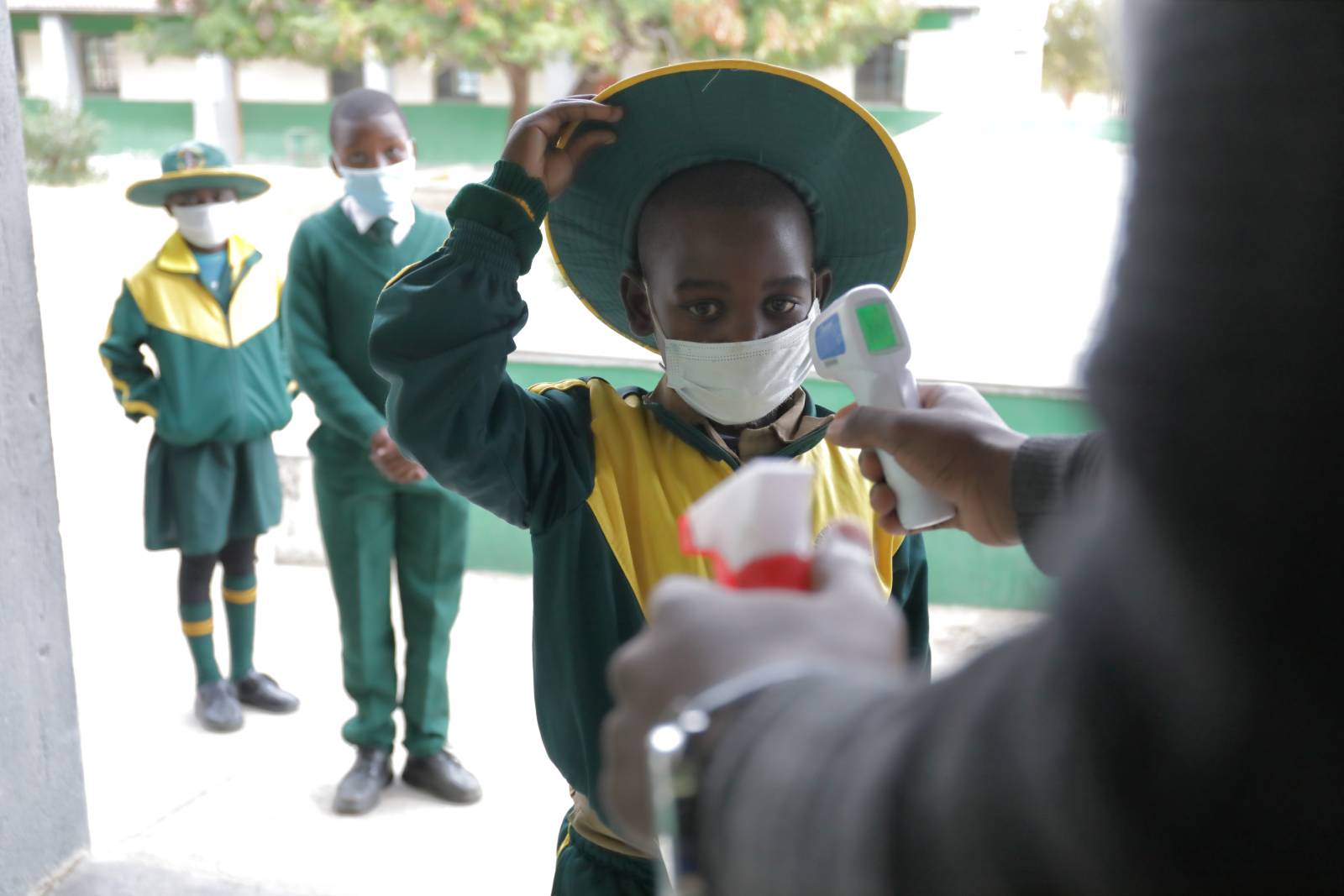 “I like being back at school, playing with my friends. My school has many beautiful flowers and trees, and the teachers are very kind,” Nomatter says. “During the lockdown, I was at home for a long time, helping with the household chores. I am happy to be back at school, even though we can only go back now three days a week instead of five.”

Nomatter and Forward, and their mother Thandikele, will become familiar to people all over Ireland this Lent. They feature on thousands of the iconic Lent boxes which will be distributed to Irish homes, schools and Churches throughout the country over the next six weeks. The Trócaire box has been a familiar feature during Lent in Ireland for the last 49 years and this year’s Lenten appeal focuses on Zimbabwe, and the devastating impact Covid-19 and climate change have had on the East African country.

The family – like thousands of families in Zimbabwe – have been struggling with the triple challenges of Covid-19, climate change and a devastated economy which are exacerbating the daily struggles they face.

According to the World Food Programme, 63 per cent of the Zimbabwe population of over 15 million live under the poverty line. Before the coronavirus outbreak, 7.7 million Zimbabweans faced food shortages after a drought and cyclone in 2019, and ongoing drought in the last year has exacerbated the situation. This has been worsened by rampant inflation.

In November 2020, the family’s already fragile world was turned upside down when Covid-19 hit. Thandekile’s husband Donovan (35) passed away from Covid-19 in South Africa where he was working to earn an income so he could provide for his family. 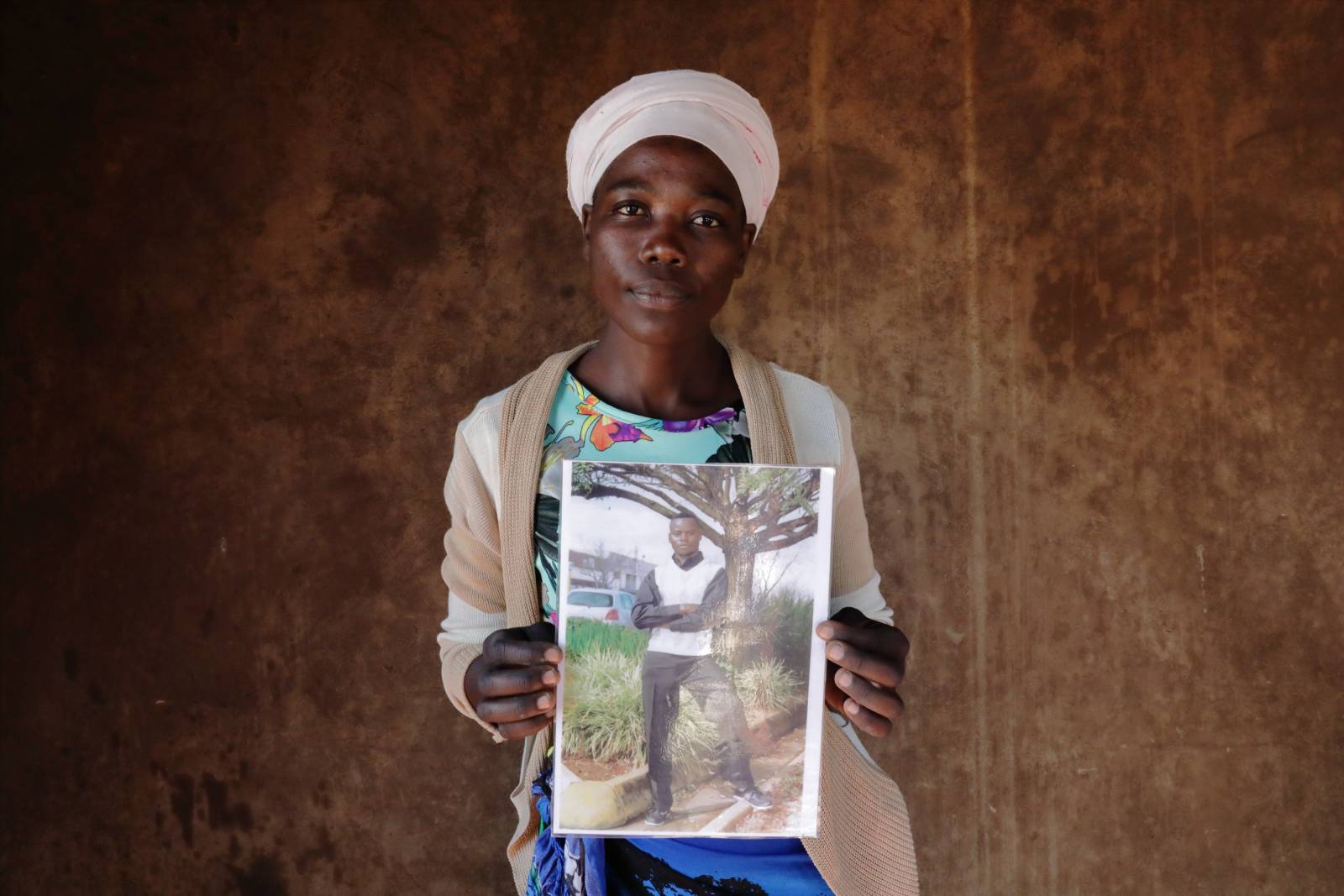 Thandekile, 31, lost her husband Donovan to COVID-19 in 2020 while he was working in South Africa to provide for the family. Photo: Cynthia R Matonhodze.

The children’s mother, Thandekile, tells of the family’s fight for survival in the Matobo district in Southern Zimbabwe without the support of her beloved husband. Climate change, which has resulted in three droughts and a severe cyclone over the past five years, means that crops are failing, affecting the ability for the family to feed themselves.

Her greatest fear now is that she will die from Covid-19 or hunger, and that there will be no-one to look after her children.

“I live for my children and my wish is to be able to provide for all their needs. My greatest fear is to die whilst my kids are still young. I pray that the Lord keeps me so that I raise them until they are old enough to take care of themselves,” she says.

The impact of Covid-19 has been deeply felt by Thandekile and her community. The last time Thandekile spoke to her husband Donovan, he had just finished work in South Africa and had been feeling fine. But the following day, Thandekile was told that Donovan was unable to talk or breathe and he was rushed to the hospital where he sadly died from Covid-19.

Devastated, Thandekile says his death was so sudden that their children are still struggling to accept the fact that they will never see or speak to their father again. “The death of my husband hit me very hard and I was bed-ridden for days. I did not know how I was going to move on and raise my children without the presence of their father,” she says. “His death greatly affected my children too. Donovan was a good father to our children and a good husband to me.”

The children miss their father a great deal. “He would bring us new clothes, sweets and biscuits when he came home from South Africa. It was nice when my father was around. I was always waiting for the time he came home,” Nomatter says.

Women in Zimbabwe are the primary producers of food. As well as struggling with livelihoods, women like Thankdekile also face increasing levels of gender-based violence due to the pandemic, with a 60 percent increase in reports of GBV incidents to service providers during the 2020 lockdown. Thandekile has seen how damaging this can be.

Even before Covid-19, Thandekile and her family were facing hunger as droughts and heavy rainfall caused their plants and crops to fail. The family would often go nights without eating as food was not always available in their community.

Following the death of her husband Thandekile struggled even more to provide food for her family. Grieving for her husband meant that she couldn’t engage in farming activities which delayed the planting of crops and made them even more vulnerable to heavy rainfall.

“Following Donovan’s passing, my life was very hard financially since he was the breadwinner. It also affected my ability to earn an income as at times I would be so stressed and too sick to even go out and work. I did not have the means to pay school fees for the children, to buy uniforms and all our other basic needs because I had no source of income,” she says.

“Due to Covid-19, a lot of businesses were shut down which made a lot of people unemployed. This worsened the ability for anyone to have access to money or at least get a job. Children could not go to school because of the lockdown and you can tell that their progress has been greatly affected.”

Irish woman Eimear Lynch, who works with Trócaire in Zimbabwe, says that the Irish public’s donations this Lent will be vital to support families who are struggling from the effects of Covid-19 and Climate Change.

“Thandekile and her family have had an extremely difficult time in the last few years. Thandekile was already struggling with shortages of food when her husband died from Covid-19. Since then, Thandekile found it even more difficult to buy food for her children Nomatter and Forward and to pay for their school fees and medicines,” Ms Lynch says. 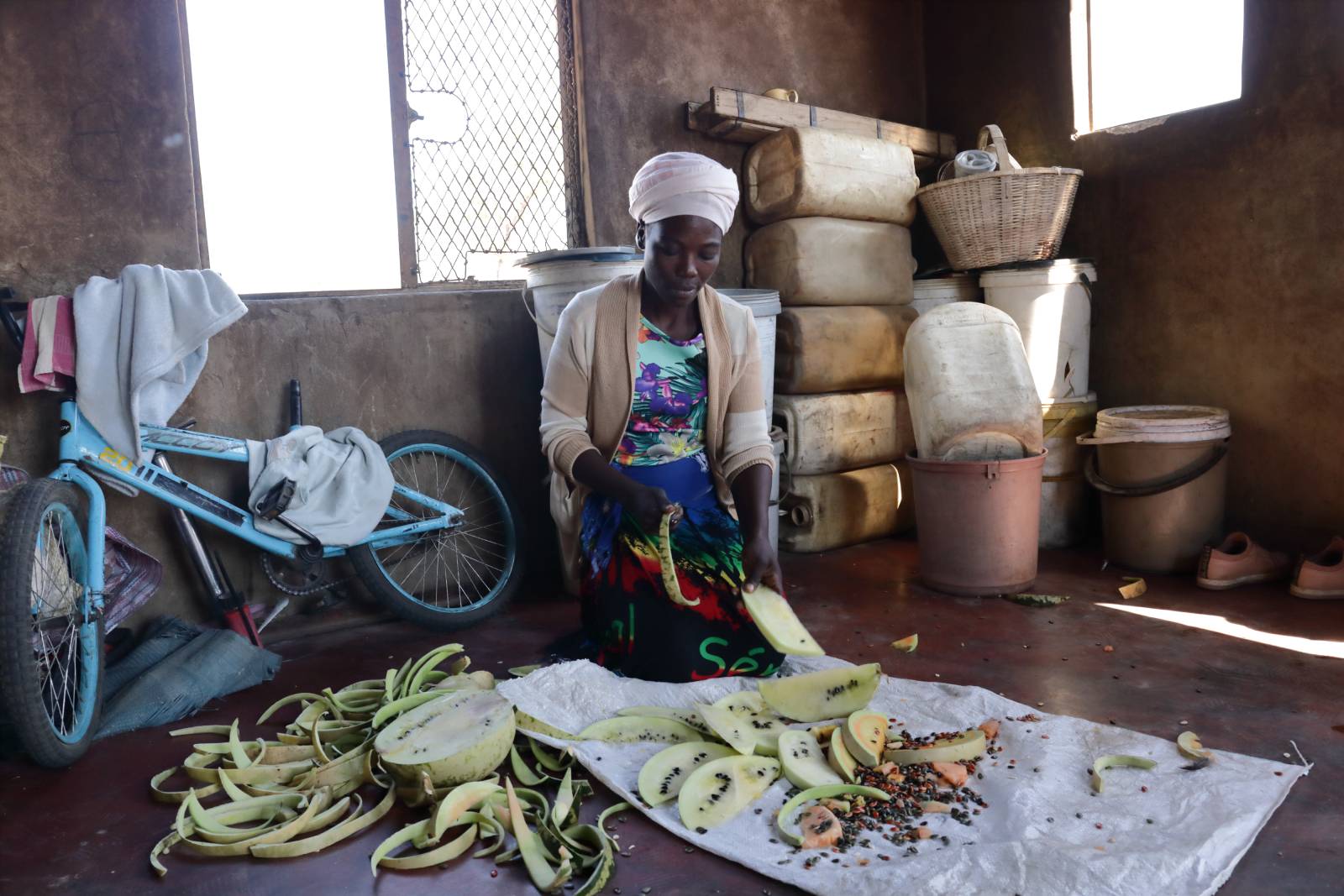 Trócaire and partner organisation Caritas Bulawayo have been working closely with the community in the Matobo district in Southern Zimbabwe. This included setting up and managing a community garden with an agroecology learning centre and a seedbank as well as working with families who have been affected by market and business closures, and restrictions on movement during the prolonged lockdowns.

“Zimbabwe depends on cross border trade with neighbouring South Africa. Since the beginning of the pandemic the border has been closed, which meant they’ve lost an important source of income. Trócaire and our partner Caritas have been supporting people by providing cash distributions for their immediate food and other basic needs, and also to prevent them from using negative coping strategies, like selling assets or not paying their children’s schools fees. We’ve also been raising awareness about Covid-19 prevention and vaccinations,” Ms Lynch says.

Meanwhile determined to provide for her two children, Thandekile began buying and selling women’s clothes in order to make money.

Her determination to create a good life for her children is also evident in her choice of names for them. Their names, Nomatter and Forward, are a daily reminder that despite the challenges the family faces, they will continue to remain positive and look towards a brighter future.

Trócaire has been working in Zimbabwe since 1980 providing humanitarian aid and food security. The agency also does a huge amount of work on women’s empowerment and human rights.

Thandekile is keen to thank the Irish public for their support and love during Lent and what is such a difficult time for her family, community, and the people of Zimbabwe.

“The greatest gift that people can give to one another in life is food and money, because we need it to survive. What gives me hope is that I am still alive despite all that we have been through as a family. Whatever the problems you have been through in life, it is important to dust yourself off and move on, have hope and work hard for the children even if it’s very difficult. I thank the people of Ireland for all the help you give to us, please do not tire,” Thandekile says.

Meanwhile Nomatter and Forward are hoping that the future will be brighter for them.

Already Nomatter is focused on a career. Her favourite subjects are Maths and English, but the Covid-19 pandemic has had an influence on her future plans. “I wish to be a nurse so that I can help the sick,” she says with a smile as bright as the sunshine in Zimbabwe in Spring.